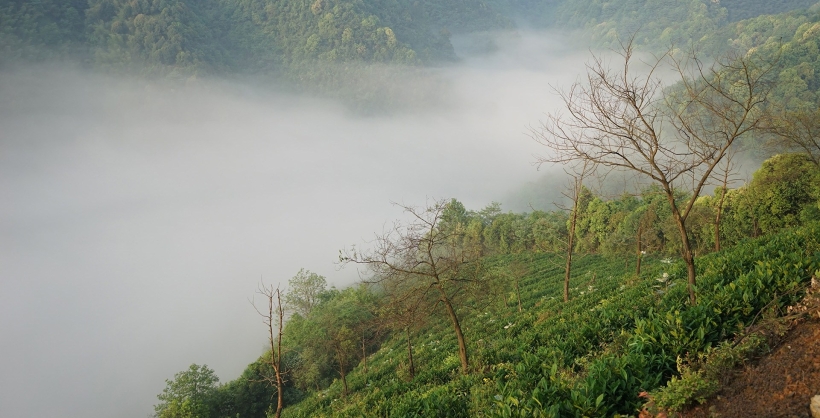 As you know, teapasar doesn’t just sell tea from around the world – we also bring you the freshest teas direct-from-farm. This week, the teapasar team is extremely excited to bring you our very first Farm Spotlight. Daorenhang is an organic tea farm located in Huangshan, arguably the inspiration for many Chinese paintings and gardens. Breathtaking scenery aside, Huangshan is also famous for their Taiping Houkui green tea. We speak to Dorian – manager at Daorenhang, to find out more about the brand, and their obsession with Taiping Houkui.

Can you tell us more about Daorenhang and its history?

Daorenhang was started in 2013, by our two founders – Herman Yip and Liu Bei. Herman is an American-born Chinese, while Liu Bei is from Huangshan, so she drank the Taiping Houkui growing up! The two of them used to work together, so when Liu Bei bought a tea mountain – all 31 hectares of it – they decided to work together to launch Daorenhang. Daorenhang’s mission is to bring traditional Chinese tea to the world through the power of the Internet.

How did Daorenhang get its name?

When Liu Bei was a child, she loved to talk to friends and family as she made her way home from school – which meant she was always thirsty by the time she stepped through the door. Because of that, the first thing she would do when she reached home would be to pour herself a glass of tea from her father’s teapot.

When we were thinking of what to call our farm, Liu Bei recalled her childhood experiences of drinking Taiping Houkui. Her dad’s name is Dao Ren, so in honour of him, we decided to name the brand Daorenhang.

Can you tell us about Taiping Houkui and why it’s so special?

There are a few reasons why Taiping Houkui is so unique. The first is its geography – Taiping Houkui comes only from Huangshan. Huangshan has a very unique environment, with low temperatures and a lot of mist. The terroir gives the tea its unique taste. Because the taste of Taiping Houkui is so dependent on its location, the amount of tea we can produce each year is extremely limited

The second reason why Taiping Houkui is so special can be traced back to its roots. The precursor to Taiping Houkui was developed in 1859, when a tea garden was opened and it was found that the teas grown had orchid notes. Back then, the tea was just called Houkui. The tea continued developing and in 1915, was exhibited at the Panama-Pacific International Exposition to enthusiastic reception, marking the debut of Taiping Houkui on a global stage. The status of Taiping Houkui was further cemented when it became one of China’s top ten teas, and was gifted to President Nixon in 1972 during his visit to China. In 2003, it was awarded protected status, which means that only Taiping Houkui from Huangshan is recognised as the genuine article.

The third reason why it’s so unique is because of its shape and taste. In Chinese, we describe Taiping Houkui this way: “猴魁两头尖，不散不翘不卷边” – as one of the teas in the “jian cha” (尖茶) category, the leaves are long, flat, and pointed at both ends. We mentioned the orchid notes just now, but Taiping Houkui actually has both orchid and chestnut notes. And of course, the environment of Huangshan measn that it is an extremely healthy tea to drink.

What is the best way to drink Taiping Houkui?

Our first recommendation would be for you to use a tall glass cup, so that you can see the leaves unfurling – it’s a beautiful sight! Take about three to five grams of tea and place it in the glass, so that the stems are facing downwards, this helps the flavours to develop correctly.

Unlike black tea, you shouldn’t brew Taiping Houkui with freshly boiled water. Instead, the water should be about 90 degrees – try waiting for a minute or two after the water boils. Pour the water till the glass is half full and let it brew for a while. When the leaves have unfurled, add more water.

The tea can be brewed more than once, so when you’re left with one third of tea, you can top up the glass with more water.

We know that Daorenhang is committed to producing healthy, organic tea. Can you tell us more about how and why you decided on these values?

We fully believe that tea in itself is such a healthy beverage and addition to one’s daily life. It would be a pity to make it less healthy due to our growing or processing methods. Additionally, we feel that there is a growing consciousness and demand for food safety, and we are determined to meet those needs.

Most of our readers don’t know much about tea farms. What is one interesting fact you can share?

I don’t know if this is common across all farms, but we have Chinese raspberries (地莓) growing amongst our tea plants! They are sweet and tart, and we sometimes pick them to eat while drinking tea!

What plans does Daorenhang have for the future?

We’re planning to open our first store in Denmark! We chose Denmark because the country is known for its stringent standards for food and teas, and we want to prove that our teas are capable of standing up to the highest scrutiny.

Our second store will likely be in Barcelona, although we haven’t yet decided on the exact location. We hope that through our stores and stockists like teapasar, we can prove our dedication to our values and raise the profile of Taiping Houkui teas around the world.

Translated to “Huangshan’s Cloud and Mist tea”, Daorenhang’s Huangshan Yunwu (黄山云雾) ($25 for 100g) is great value with a subtle sweetness when brewed.

Splurge: If you’re feeling a little more fancy, we highly recommend Daorenhang’s Taiping Houkui No. 23. These leaves are large and thick, and despite a light tea liquor, this tea is extremely flavourful! A great way to get to know the Taiping Houkui.

As part of this brand spotlight, enjoy 30% off selected Daorenhang products on teapasar.com, with the code “DAORENHANG30”. Valid until 23:59, 4th January, 2019.